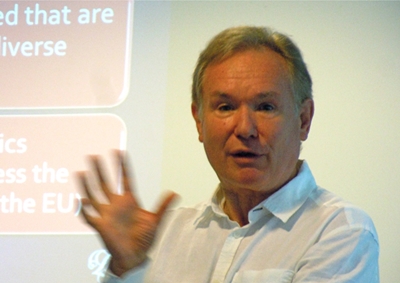 Professor David Payne, acknowledged as the brains behind the erbium-doped fiber amplifier (EDFA) and one of the best-known figures on the UK photonics scene, has received a knighthood in the Queen’s New Year honors list.

Now officially known as “Sir” David, Payne is the director of the Optoelectronics Research Centre (ORC) at the University of Southampton. He received the recognition "for services to photonics research and applications", reflecting his extensive contributions to harnessing the use of light for applications in telecommunications, sensing, and lasers for manufacturing.

Chief among those contributions is the EDFA, first developed by Payne’s Southampton team in 1987. It has proved to be a critical component in the backbone of the optical fiber transmission systems that power the Internet and carry voice calls around the world.

But the researcher’s pioneering work has also led to the development of specialty fibers and high-power fiber lasers of the sort now regularly used to drill, cut and weld metal and other materials in industrial manufacturing applications.

Free calls
In a University of Southampton press release, Payne said: “I was recently described by my peers as the man who made phone calls free. While this is an exaggeration, it conveys the profound impact of the optical internet on our daily lives. Thousands of engineers and scientists worked away in the background and changed our world for the better. When some of us are recognized publically for what we have achieved, it is a wonderful accolade for us all.”

Although Payne has spent more than four decades in research at Southampton – starting as a student - he is also recognized as an entrepreneur in the photonics field.

Probably best known for being instrumental in the spin-out of the fiber laser specialist SPI Lasers – subsequently acquired by the German laser powerhouse Trumpf for $40 million – Payne’s leadership has also resulted in a photonics cluster comprising nine companies surrounding the ORC.

Back in June 2000, and at the height of the telecoms boom, Payne and US entrepreneur Don Spalinger closed a remarkable first-round venture capital funding round of $55 million for SPI. With the cash, the company built a $10 million fiber production facility in Southampton initially aimed at telecoms applications.

Awards collection
The University of Southampton Vice-Chancellor, Professor Don Nutbeam, said: “The erbium-doped fiber amplifier is a crucial invention that has made possible the global information superhighway and high-speed telecommunication networks, which are so important to us all in the 21st century. I am delighted that the unique contribution David has made through his research is being recognized with this prestigious honor.”

Professor Dame Wendy Hall, the institution’s Dean of Physical and Applied Science, added: “I am delighted that David has been honored in this way. He richly deserves it for his personal achievements but it is also an honor for the University of Southampton, which has been his home as both a student and a professor for nearly 50 years.”

Payne will add a knighthood to several high-profile awards for his scientific achievements, having been presented with the Tyndall Award in 1991, the IEEE Photonics Award in 2007 and the Marconi Prize in 2008. He became a Commander of the British Empire (CBE) in the 2007 New Year honors list.