Thermal imaging used in tandem with other tests offers an alternative to mammography. 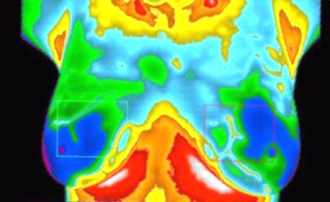 Mammography is the commonest imaging technique applied to the detection of breast cancer, employing low energy X-rays to scan the breast and spot abnormalities.

But not all practitioners trust mammography to produce reliable results, believing that the technique produces unacceptable levels of both false-positives and false-negatives. It is also expensive, and sometimes unavailable on financial grounds to women who are particularly at risk from the disease.

Thermal imaging using infrared scanning is an alternative, but despite several decades of occasional attention, the technique has failed to become widely adopted or trusted.

Greg Stockton, a member of the executive committee of SPIE DSS 2012, described the situation as "complete disarray, with no large company willing to invest in the technology for breast scanning." Legal liabilities and practitioner competence have also played a part in "the stigma attached to scanning or thermal imaging of the breast."

Phillip Bretz of California's Desert Breast & Osteoporosis Institute presented a paper at SPIE DSS that might show a way forward, and allow the technology gain more traction by improving the reliability of its results.

His work involves using an existing IR system originally developed for breast scanning by Infrared Sciences and now marketed by Computer Vision Systems Laboratories, and employing it in concert with two other analysis techniques, building up a broader and more comprehensive picture of a patient's condition than a single test can provide.

"The infrared scanning employs a FLIR A40 detector to detect the heat signature of the cancer, connected to a neural network designed to learn and become more accurate as experience develops," said Bretz. "This artificial intelligence system is the key to avoiding the problems of false-positives and subjective assessment of the scans, which have affected much of the IR scanning for breast cancer that is carried out."

Equally significant is considering the infrared scans alongside results from the other two assessments. The first is OncoVue, a DNA saliva test that not only indicates the degree of risk of breast cancer but also when that risk is likely to manifest. OncoVue identifies abnormal single nucleotide polymorphisms, or SNPs, which are known to have age-specific genetic associations with breast cancer risk.

The other is Halo, a relatively new diagnostic test which examines nipple aspirate fluid and can indicate the presence of abnormal cells within the breast's milk ducts, the site for about 90 percent of breast cancer development.

New paradigm
"Using the three elements together produces a new paradigm for breast cancer diagnosis," commented Bretz. "That paradigm involves first knowing the risk of a woman developing cancer and when that risk is likely to manifest, through information provided by OncoVue, then using the infrared study to alert us to the possibility of a developing cancer, and finally finding the occult cancer with the Halo technique. Together this approach could enable the identification of ultra-small breast cancers, 2 to 3 mm in size, that can then be treated."

At SPIE DSS, Bretz presented results from patients whose cancers had been identified through this combined approach but either inconclusively seen by mammography or missed altogether. In five cases, the combined weight of evidence was able to identify cancers outside the breast itself.

"There is a need for an alternative in monitoring women at risk and women with dense breast tissue, where mammography is less accurate and MRI too costly," he said. "Abandoning mammography, ultrasound and MRIs is not the answer, but there should be an awareness that these new technologies could hold the answer for screening, saving lives and cost reduction. This study demonstrated that these diagnostic techniques can dramatically lower costs and provide results at least as good as the older approaches. Now further research and a multi-center clinical trial are necessary."