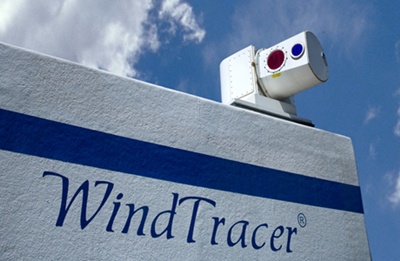 According to the Thai airport authorities, Suvarnabhumi – opened in 2006 – already ranks as the sixth-busiest airport in Asia, having handled nearly 48 million passengers in 2011.

The airport will use Lockheed Martin’s 'WindTracer' Doppler lidar as part of its future integrated alerting system, designed to warn aircraft close to the airport of severe windshear hazards like 'microbursts' and 'gust fronts', which are caused by stormy weather.

The WindTracer system features a pulsed 1.6 µm laser, and is designed to complement the more widely used radar systems to provide additional information - particularly for warning of 'clear air' turbulence, which is difficult for the more traditional technology to detect.

In clear air, lidar can monitor wind shear because the laser pulses are back-scattered by aerosols, tiny particles in the atmosphere that are too small to provide any kind of radar signal. The movement of the aerosols slightly shifts the scattered wavelength, an effect that can be detected by the Doppler system. In poor visibility, which adversely affects lidar because of the greater number of water droplets in the atmosphere, the radar system can pick up where lidar performance drops off.

Global deployment
First deployed in 2002, Lockheed’s system is now in place at many of the world’s busiest airports, including JFK in New York, Atlanta Hartsfield and San Francisco International in the US, the European hubs of London’s Heathrow and Frankfurt, and both the Narita and Haneda airports that serve Tokyo.

In the US, the system is also being evaluated by the Federal Aviation Administration (FAA) to detect so-called 'wake vortices' – the clear-air turbulence that is generated by the powerful thrust of large aircraft, and which can create problems for smaller aircraft flying a relatively short distance behind.

According to Lockheed, WindTracer currently performs wake-related functions at three US airports while the system has also been chosen as the primary tool for measuring wake vortices at airports in New York, London, Frankfurt and Paris.

One reason why the lidar systems have not been more widely deployed so far is their cost, and Lockheed also says that pairing Doppler lidar with X-band radar (rather than C-band, which requires large receiver dishes and is expensive) is a more cost-effective option. It has been working with the European aerospace and defense giant Selex on an integrated system for initial deployment at Frankfurt and Munich that uses the complementary nature of the lidar and 9 GHz X-band radar sensors.

According to Germany’s Federal Ministry of Transport, Building and Urban Development, the integrated systems should be operational at Munich and Frankfurt by August 2013.

While weather-related air accidents are extremely rare, severe weather is a major factor affecting air traffic, and it is estimated by the German ministry that a quarter of all delays in European airspace relate to the weather. In theory, airport capacity could be increased and delays could be reduced through the wider use of the combined Doppler lidar and radar system.