High-efficacy competition winner is not yet available in stores, but could be launched early next year. 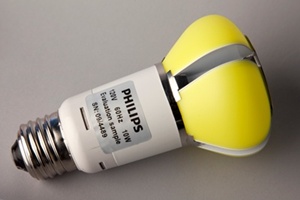 An LED-powered bulb developed by Philips that consumes less than 10 W is the first winner of the US Department of Energy’s “L Prize” – designed to find high-efficiency replacements for popular bulbs. The design is intended as a replacement for the standard 60 W incandescent used by millions of households and businesses around the world.

According to the DOE, around 425 million 60 W bulbs are sold in the US each year - representing around half of the entire domestic market for incandescents. It established the L Prize back in 2008, offering a $10 million cash incentive and valuable endorsement for products that could meet its stringent requirements for performance, quality, cost and reliability.

Perhaps because of those tough requirements, only Philips has officially entered the competition thus far – and that was nearly two years ago, back in September 2009. Over the past 18 months, its 910 lm design, which Philips says operates with an efficacy of 93.4 lm/W at a warm-white color temperature of 2727 K and offers a color rendering index of 93, has been put through extensive testing.

Those tests have included both laboratory measurements of performance and lifetime, and field testing in which 1300 samples of the Philips bulb were installed across 40 sites in the US, including deployments in food retail outlets, hospitals, homes and museums.

User surveys
In user surveys, two thirds of more than 1200 respondents said that the Philips bulb produced the right level of brightness and “warmth”, with only 7% complaining that the light produced had a negative impact on the ability to see clearly in the illuminated space. More than 70% said that they would recommend the technology to others.

Although Philips’ has been the lone entry in the L Prize competition until now, GE’s Lighting Solutions unit recently announced its intention to compete – saying that its candidate would “more closely match consumer preference for an incandescent look and feel” than the Philips approach. GE has been working with Cree, using the company’s TrueWhite LEDs in its designs. According to the DOE, Lighting Science Group has also said that it will enter, and the 60 W category of the L Prize is now closed to further entries.

While Philips’ 60 W L Prize winner is not yet available to buy – the company says only that it “could” arrive in stores in early 2012 – GE’s “Energy Smart” replacements for 60 W incandescent bulbs will become available this November. However, with a power consumption of 13 W, these GE products would not meet the requirements of the L Prize, which stipulate that consumption must be less than 10 W for a 60 W replacement.

GE also has plans to launch replacements for 75 W and 100 W incandescent bulbs, expected to consume 18 W and 27 W respectively, in late 2012.

The DOE had initially launched a similar L Prize competition to replace the popular PAR 38 halogen bulbs, which produce a spectacular light but are inefficient and relatively short-lived. However, this competition was suspended in January 2011, with the Department saying that it would integrate lessons learned from the 60 W bulb version.

Philips will receive a $10 million prize as the first winner of the L Prize competition but, perhaps more significantly, it will have support from 31 utilities and other partners to promote and develop markets for its design – giving access to a potential 100 million customers across the US. One of the key questions now surrounds the price at which the bulb will be sold, although the L Prize Technical Review Committee has said that in its opinion the product “would be viable in a competitive commercial market”.

With the 83% energy saving afforded by the LED-based replacement, the DOE estimates that a complete switch from 60 W incandescent to 10 W solid-state lamps would save approximately 35 TWh of electricity annually (assuming that the average light is on for just under two hours each day) – enough energy to power a city the size of Washington, DC, three times over.