The UK-based manufacturer of imaging sensors used in aerospace and defense applications reports a 14% sales increase. 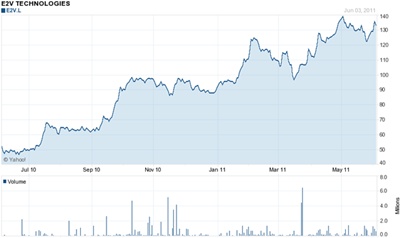 Imaging sensor manufacturer e2v Technologies has reported a strong increase in both sales and profit for the fiscal year ended March 31, validating its management’s strategic restructuring of the company last year.

As a result, e2v, which makes RF and high-reliability semiconductor products as well as CCD and CMOS detectors, will pay shareholders a full dividend earlier than planned. And with business expected to continue improving, chief executive Keith Attwood and his senior managers have increased e2v’s medium-term targets for both revenue growth and profit margin.

Total revenues grew 14% over the previous year, reaching £228.6 million, while the company swung to a pre-tax profit of £25.8 million, from the £9.7 million loss posted last year. e2v has also managed to reduce net borrowings significantly, down from £44.8 million to £28.1 million.

Attwood says that he now targets underlying revenue growth of more than 10% per annum, as the company benefits from both a better business environment in its sectors, and a strategy to move up the value chain: “During the year, we have made progress on implementing the growth strategy that we announced last July,” he said.

“This strategy is intended to accelerate our growth in revenue above that of our overall markets. We will achieve this through repositioning our product offerings at a higher level in the value chain, our focus on the two new applications we introduced last year, and through geographic expansion, in particular in the US aerospace and defense [sectors], and Asia.”

Imaging sector grows 21%
High-performance imaging is one of the three divisions that make up the overall e2v business, and has been a key part of the strong performance over the past year. Sales from the division grew 21% to reach £64.9 million – although that figure was skewed by £17.5 million in one-off revenues from a last-time buy (LTB) of products made at e2v’s front-end fab in Grenoble, France, which is due to close this month as part of the company’s restructuring strategy.

But underlying performance was still strong, growing 8%, thanks largely to demand for machine vision cameras from Asia. That helped to off-set a fall in sales for space imaging applications, which were delayed due to what e2v describes as “technical issues”.

e2v’s imagers are used in a wide range of machine vision applications, including ophthalmology and semiconductor manufacturing, with key customers including Carl Zeiss Meditec and Canon Optopol. The company is looking to grow this part of its business, through a larger presence in Asia, and the expected launch of new high-performance CMOS cameras later this year.

e2v is developing its own CMOS technology platform for space imaging. The company has previously been involved in some high-profile space applications. It provided CCD sensors used to image the planet Mercury in close-up and high definition for the first time, and also for NASA’s Solar Dynamics Observatory – where they helped to capture video of a spectacular solar flare earlier this year.

Demand for scientific imaging products recovered in the second half of the year, with sales concentrated among the three major scientific camera makers Andor, Hamamatsu and Roper. e2v says that it expects to grow sales in this area in part through the release of a new, high-performance sensor for top-end applications.

The strong momentum in imaging sensors saw the division post an operating profit of £12.7 million for the year, up from only £0.5 million in the previous 12 months. The division’s order book is also looking strong, with £46 million of products set for delivery within the next year, up 7%.

Boost from UK government grant
e2v has also received a boost from the UK government, in the form of a £6.2 million grant from the Department for Business, Innovation and Skills (BIS). That grant will be used for investment in the company’s research, development and production operations in Chelmsford, Essex, creating an anticipated 100 new jobs by 2014, with supporting academic posts at research partner Nottingham University.

The grant is part of the UK government’s £1.4 billion Regional Growth Fund, intended to stimulate enterprise by providing support for projects and programs with significant potential for creating long-term growth in the private sector.

e2v was spun out of its former parent company, the giant defense, aerospace and telecommunications group Marconi, in 2002 through a management buy-out led by Keith Attwood. The company has been listed on the London stock exchange since 2004, and its stock price has near-trebled over the past year.