FLIR hampered by US budget delays

But the thermal imaging company still racked up record financial results and is set to issue its first ever shareholder dividend. 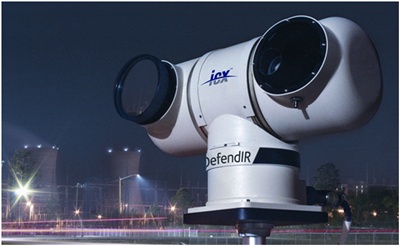 After a tenth consecutive year of reporting record revenue, the thermal imaging company FLIR Systems is to issue its first quarterly dividend, a cash payment of $0.06 per share of its common stock on March 10, 2010.

The decision came after the Portland, Oregon, firm, which has a strong exposure to US government and military spending for security applications, reported annual sales of $1.39 billion for fiscal year 2010 – up 21% on the previous year and nearly double the figure reported as recently as 2007.

A significant portion of that revenue growth was the result of two major acquisitions in 2010, of which the most recent – ICx Technologies – was completed on October 4. And although CEO Earl Lewis noted that each of the company’s key operating segments showed growth in the closing quarter of 2010, the detailed picture is a mixed one.

While sales of commercial vision systems and thermography equipment grew very strongly in 2010, FLIR’s single biggest unit – government systems – grew only 1% from the fourth quarter of 2009. A slowdown in orders from the US government, which accounts for approximately one-third of FLIR’s revenues, will also be felt in the coming months, thanks to delays in the US budgeting process.

FLIR’s best guess is that a budget agreement will not be reached before the end of March, meaning that its 2011 revenues are likely to be back-loaded into the second half of the year after normal spending patterns resume.

That said, the company’s thermography segment is performing extremely well and posted record revenues of exactly $100 million in the final quarter of 2010, with strong demand in Asia and especially for FLIR’s low-cost i5 and i7 products.

Optical gas monitoring
The company added that it was starting to benefit from a new ruling by the US Environmental Protection Agency (EPA) that will require industrial plants to perform optical monitoring of gas emissions in locations that are difficult to sample with conventional instruments. FLIR says it has already identified at least 2800 potential sites in the US where those measures should come into force.

In defense applications, FLIR added that the new ICx division delivered more than 300 of its “Fido” systems for detecting explosives in the latest quarter. The systems use amplifying fluorescent polymers to detect trace levels of popular explosives used in home-made IEDs, for example pentaerythritol trinitrate (PETN), while ICx also sells a Raman spectroscopy scanner called “Fido Clearpoint” to identify toxic industrial chemicals and other harmful materials. 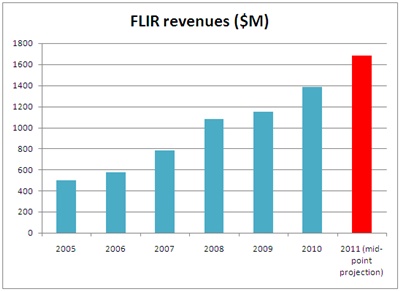 However, FLIR is in the process of streamlining the ICx division, and added that it intends to divest seven business lines as it focuses on key products. In all, the new division contributed $46.1 million in sales and $2.1 million operating income in its first quarter under FLIR management – indicating some potential to improve margins in the longer run.

Despite expectations of a difficult forthcoming quarter in the government systems side of the business, FLIR remains confident that 2011 will prove to be yet another record year for revenues. In his outlook, Lewis projected that fiscal 2011 revenues would reach somewhere between $1.63 billion and $1.73 billion – equivalent to sequential growth of 18-25%.