At its fifth annual meeting, the organization presented its vision for future photonics innovation to European Commissioner Neelie Kroes. 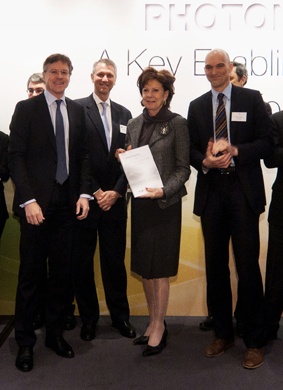 Vision for the future

By Mike Hatcher in Brussels
The European photonics community should propose clear actions to the European Commission (EC) about how to turn world-leading photonics research into innovative, mass-market products.

That was the message from Neelie Kroes, the EC’s vice president for the digital agenda, as she received the Photonics21 organization’s vision document on the future of the industry in Brussels.

Speaking at the fifth annual meeting of Photonics21, Kroes focused on the need for Europe to provide an environment in which small and medium-sized enterprises (SMEs) can flourish, and also for the community to think beyond the bounds of research funding:

“It is not enough to do excellent research,” Kroes said, citing the example of the flat-panel display (FPD) industry, where a strong research base could do nothing to stop the rapid migration to Asia of FPD manufacturing. “We are facing the same danger now with solid-state lighting,” she warned.

“We need to create a market which is friendlier to innovation. The projects we will launch in solid-state lighting will showcase what can be done.”

Launched in late 2005, the Photonics21 network of companies has grown rapidly, and the organization now includes more than 1600 members, demonstrating the breadth of the markets in which photonics technology is embedded.

SME representatives at the event will have welcomed Kroes’ message on simplifying the transfer of technology from the research stage to an industrial level: “We need new thinking on how to accelerate the entrepreneurial capacity and innovativeness of high-tech SMEs,” she said. “I want to see more bridges between potential and the resources needed for commercialization.”

Valley of death
That gap is an acknowledged problem within European photonics, and one that Photonics21 is also striving to address. In its vision document, the organization has highlighted some key ways that it believes the so-called “valley of death” between research and successful commercialization can be bridged.

Also speaking at the annual meeting, Photonics21 vice president Giorgio Anania, formerly the CEO of photonics firm Bookham (now Oclaro), identified three “pillars” to support that effort. At the research level, the first of those pillars, suggestions include more market-led research – rather than work focused on specific photonic components or applications.

For example, Photonics21 says in its preliminary vision document: “Advances in laser technology must be undertaken in a more co-ordinated manner if they are to address effectively the varying requirements of the multiple application opportunities in information and communication, manufacturing or biophotonics.” 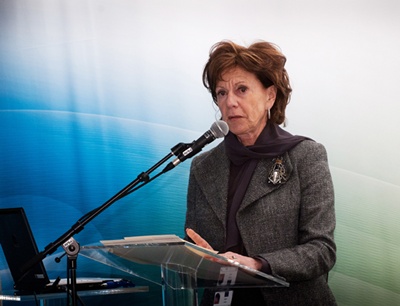 The second pillar suggested by Photonics21 is in demonstrating photonics capability through specific deployment programs, funded through public-private partnerships and giving Europe a “first-mover” advantage in a targeted area. “We need to make sure that the voice of photonics is heard,” Anania said.

The vision document also identifies an improved infrastructure for manufacturing as a key requirement, so that photonics products will actually be manufactured in Europe. Like Kroes, it focuses on the needs of SMEs as particularly important, and is urging that the bureaucracy associated with dealing with the EC is streamlined.

Key achievement
Photonics21 president Martin Goetzler, who is also the CEO of lighting giant Osram, opened the annual meeting by saying that 2010 had witnessed the community’s biggest achievement so far, in getting photonics defined as one of only five key enabling technologies (KETs) at the European level.

But Goetzler added that 2011 would also prove to be a decisive year, with a final report due from the EC’s KET working group in July 2011. He identified this year’s key priorities as generating the input for that KET initiative, as well as collaborating with the EC’s energy group and turning the ideas in the vision document into reality. “[We need] large-scale demonstrations, public procurement projects, and fast-track funding for SMEs,” Goetzler emphasized.

“We miss out on the opportunity to sufficiently exploit R&D successes in terms of growth, jobs and prosperity for Europe’s society,” he explained. “What we need is a comprehensive, fully fledged research and innovation strategy which allows us to translate scientific excellence into innovative future products, processes and applications – faster, more focused and more market-oriented.”

Both Goetzler and Kroes also highlighted that there would be major changes to the way that the European Union funds research and innovation from 2013. These are set out in a Green Paper for what is now known as the Common Strategic Framework (CSF), previously referred to as Framework Programme 8. That paper, published February 9, is now out for public consultation:

“I encourage you all to contribute,” Kroes told the Photonics21 audience.