Lynred and Umicore are co-developing a next-generation thermal sensing technology.

Lynred, a developer of infrared detectors, and Umicore, a “circular materials technology company”, are to co-develop novel thermal sensing technology which, they say, “will significantly improve the performance of Pedestrian Autonomous Emergency Braking (PAEB) systems in adverse lighting conditions at an affordable cost”.

Worldwide every year approximately 1.3 million people die as a result of road traffic crashes. More than half are vulnerable road users, such as pedestrians, motorcyclists, and cyclists, with roughly 75% of these fatalities occurring where visibility is poor.

A study conducted by the American Automobile Association (AAA) revealed that current PAEB systems “perform inconsistently and have shown to be inadequate at night, the partners report. Increasingly, insurers and rating agencies are advocating for rulemaking to equip passenger vehicles with PAEB systems that work well in the dark.

“Protecting pedestrians in poor visibility conditions makes a strong case for thermal imaging, which is well-established for being efficient in the majority of degraded visibility scenarios, as it can detect and identify objects at greater distances and with more accuracy,” commented Sebastien Tinnes, Global Market Leader, Lynred.

“We are delighted to have collaborated with Umicore, a long-time partner, on this exciting project to link together sensors and optics, the two most critical parts of a thermal sensing system and therefore optimize the capabilities and performance of next-generation PAEB systems.”

The co-development of the thermal sensing technology for improving next-generation PAEB systems, which consists of a new 8.5µm pixel pitch microbolometer designed by Lynred and Umicore’s wafer-level lens technologies, has received funding under the European HELIAUS project. 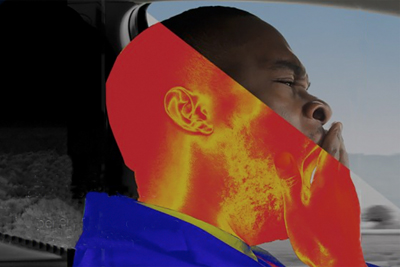 In conjunction with other HELIAUS partners, the capabilities of this latest concept in thermal technology for in-cabin and out-of-cabin applications, will be demonstrated at AutoSens, a conference dedicated to automotive safety systems, taking place in Brussels, Belgium, September 12 – 15. The thermal sensing solution, notably providing additional information vital for autonomous driving, will be installed in a car equipped, internally and externally, with thermal cameras.

“Thanks to the fruitful collaboration with Lynred’s sensor development team and the other HELIAUS partners, Umicore was able to further refine and incorporate its unique Tessella® chalcogenide wafer level optics technology into a groundbreaking, affordable and large volume thermal camera solution which will bring much needed performance improvements to current PAEB systems,” said Mikael Frenkian, business line manager IR solutions at Umicore.

• Lynred and Umicore, which have previously collaborated on projects to promote and develop infrared technologies, began working on the HELIAUS project in 2018, along with 11 partners from four countries. During AutoSens, Lynred and Umicore will join fellow partners at booth #30. Lynred will also be making the following presentation during AutoSens: Thermal imaging to reduce pedestrian fatalities: a case study for AEB, on Tuesday, 13th September 2022.