Revenues and profits up sharply, while Coherent merger is now expected to complete in early 2022. 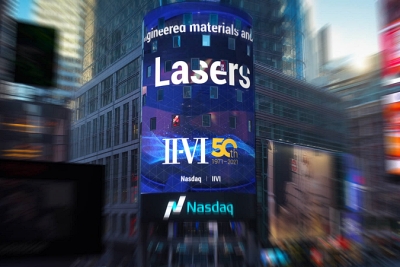 The highly diversified optics and photonics company II-VI has posted annual revenues in excess of $3 billion for the first time, confirming its growing presence as one of the biggest hitters in the business globally.

Up 30 per cent on the prior fiscal year’s total, the $3.1 billion figure for the 12 months ending June 30, 2021, was boosted by a full year’s contribution from subsidiary Finisar, which was acquired in late 2019.

But the underlying business momentum continues to look strong, with sales in the most recent quarter totalling $808 million, boosted by record-breaking demand from the communications, industrial lasers, and semiconductor capital equipment sectors.

And by this time next year, that quarterly run-rate should stand well in excess of $1 billion, assuming that II-VI’s acquisition of laser giant Coherent goes according to plan.

That is now expected to conclude in early 2022, rather than late 2021, with II-VI’s executive team saying that the adjusted timing better reflects the current case load on the various regulatory authorities who need to clear the deal.

During the same period the firm’s “compound semiconductor” division, which includes carbon dioxide laser optics, VCSELs, and high-power laser bars among a very diverse portfolio, posted sales of $258 million - up 13 per cent on the same period last year.

The uptick in business saw II-VI post pre-tax earnings of $353 million for its latest fiscal year, compared with a loss of $64 million 12 months ago.

II-VI’s CTO Giovanni Barbarossa told an investor conference call that sales of 3D sensing products based around VCSEL arrays had more than doubled year-on-year on market share gains, and now represented just under 10 per cent of the firm’s total sales.

“This journey will continue as we accelerate our innovation roadmap, including multi-junction VCSELs, photodiodes, metalenses, and driver electronics, [as well as] delivering new module functionalities to wafer-scale co-packaging,” he added.

3D sensing products are now expected to proliferate beyond the smart phone applications that have dominated thus far.

“These modules will provide a compelling value proposition in multiple end markets, including in automotive, where driver and occupancy monitoring systems are increasingly recommended or required by US and European transportation safety regulators,” Barbarossa said.

Super-cycles
Demand for optical communications products is also growing fast, with the CTO describing the current situation as an “unfolding super-cycle”.

“We expect the demand for higher speed transceivers to be strong for the next five years,” noted Barbarossa, adding that sales of 980 nm pump lasers had risen to record levels in the latest fiscal year.

The growth story is similarly apparent in the industrial laser sector, where II-VI provides optics for both carbon dioxide and fiber lasers. Sales of industrial laser optics hit an all-time high in the latest quarter, jumping 50 per cent and accounting for 11 per cent of total revenues.

“Growth was strong in both CO2 and fiber laser components,” said Barbarossa, also pointing out that II-VI’s aftermarket business for industrial lasers had just registered its best-ever monthly sales in the firm’s entire 50-year history.

That is the result of a number of factors, including the recovery of the global industrial laser market, as well as the collaboration with Coherent initiated in late 2020, prior to the bidding war that saw II-VI beat rivals Lumentum and MKS Instruments to the merger deal.

While II-VI is, like most industrial technology companies, currently impacted by shortages of electronic components in the supply chain, it is also benefiting from the investment in semiconductor wafer production needed to alleviate those shortages.

Barbarossa sees another “super-cycle” unfolding here, with the build-out of wafer fab capacity over the next few years - including the strategic investments needed to expand semiconductor wafer production in the US and Europe.

“As we confront the challenges of the fourth surge, our operations in Asia, particularly in the Philippines, Vietnam, and Malaysia are experiencing extended quarantine and isolation periods.”

In addition to the ongoing supply chain constraints - described by Bashaw as “daunting” - that could have an impact on the company’s production capacity in the current quarter.

Commenting on the progress being made towards the Coherent merger, Bashaw added:

“We've learned a lot about each other's jobs, and we are planning to conduct similar networking events in Europe and Asia in the next few months. Throughout II-VI and Coherent, we are excited for the promise that this combination will realize.”

II-VI’s CEO Chuck Mattera, who said he had already met with more than 25 members of Coherent’s senior management team, added:

“I am deeply impressed by their core competencies and long-standing contributions to the laser and photonics industries, their respect for the challenges that had to be overcome with each successive generation of technology, their team orientation around innovation, and their sense of excitement about the opportunities to continue to transform the world.”

• Following the latest update II-VI’s stock price fell in value by around 4 per cent on the Nasdaq. Currently trading at just under $65, the company commands a market capitalization in the region of $6.8 billion.