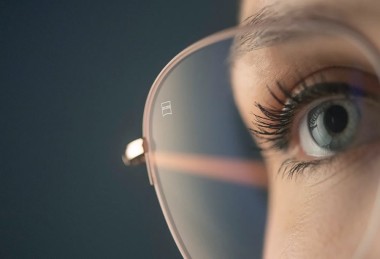 Zeiss BlueGuard lenses incorporate wavelength-blocking material into the lens material itself and block up to 40 percent of incident 400 to 455 nanometer light, according to the company.

The ill-effects of excessive exposure to blue wavelengths from screens and displays has been studied for some time, but the Covid-19 pandemic has exacerbated the problem by compelling many people to incorporate online working with their domestic media consumption.

"Digital screens and indoor LED lighting emit a higher proportion of blue light than traditional incandescent or halogen-type light bulbs, and we are often exposed to this blue light for long periods of time," said Christian Lappe of Zeiss.

"This combination of excessive near-work and chromatic intraocular challenges linked to blue light strains the eye muscles and can contribute to visual discomfort and asthenopic symptoms associated with digital eye strain."

The first indications that blue wavelengths entering the eye could have negative effects were noticed some decades ago, alongside the discovery that ganglion cells in the retina other than the rods and cones directly involved in image formation were nonetheless also reacting to incoming light.

Stimulation of these cells proved to be closely connected to the smooth running of an animal's circadian rhythms, a cycle keyed to visual detection of changing natural light. The retinal pigment involved, a variant of melanopsin, is photosensitive in the blue wavelengths around 470 nanometers, and additional stimulation at those wavelengths disrupts the natural physiological response.

The same blue wavelengths have also been linked with physical damage to the fragile tissues of the eye, and can be associated with cataract formation, age-related macular degeneration and other conditions.

Changes in lighting technology have brought this academic topic to new relevance, with early domestic LEDs producing light which appeared white to the eye when viewed directly but which involved pump wavelengths in the blue region of the spectrum. Ageing of the LEDs in use shifted emissions further into the blue wavelengths.

Chemical structure of the lens

Modern screens on computers and mobile devices also emit blue wavelengths, unless the manufacturers provide a specific way to reduce it, but an exact understanding of the spectral diet of human beings and the specific wavelengths of most significance is still being built up. A project at Swiss research lab EPFL was set up as recently as 2019 aiming to design a wearable light sensor in order to provide valuable data about exposure.

Effective blocking of the specific blue wavelengths of concern has proven to be a challenge for manufacturers of commercial optical lenses. Adding a suitable film layer to the surface of an existing lens material is one approach, but the film is then prone to peeling or scratches.

A better solution is to adjust the optical properties of the lens material itself during manufacture, so that it blocks certain blue wavelengths while remaining optically transparent to other colors, and this is the approach Zeiss has taken with BlueGuard.

"Zeiss BlueGuard incorporates the latest organic-chemical technology to make the blue-light blocking an integral part of the chemical structure of the lens material," commented the company. "BlueGuard Lenses additionally ensure full UV protection up to 400 nm."

This approach also avoids creating irritating and disturbing reflections in the lens surface, a common disadvantage of many blue light blocking solutions according to Zeiss.