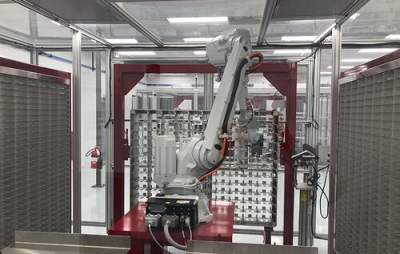 Peak Nanosystems, the Valley View, Ohio, company that manufactures high-performance polymer optics based on nano-layered structures, has completed a new investment round worth $25 million.

The finance from Squadron Capital - which invested the same amount back in April 2020 - will support a ramp in production of gradient index (GRIN) optics, as well as developmental films used in capacitors and specialty applications.

Unique offering
Fabricated with Peak's proprietary extrusion technology and a nano-layer process originally developed by Case Western Reserve University spin-out PolymerPlus, the polymer GRIN lenses can be used in a variety of applications, from lightweight binoculars to medical endoscopes and drone vision systems.

The April 2020 funding enabled Peak Nano to acquire Polymer Plus, and the company’s Peak Nano Optics subsidiary has since built a new manufacturing site in Cleveland, and what is believed to be a unique optical design laboratory for nano-layered polymer GRIN optics.

“The first-of-its-kind optics foundry had its official grand opening in July 2021,” stated the firm. “It is the most advanced optical design and manufacturing facility in the world.”

Peak Nano’s CEO Jim Welsh added in a release revealing the latest investment: “We began our work in 2016 to build a company that would commercialize GRIN optics, and we have broadened the impact of that investment into our Peak Nano Films entity which gets us into high-performance films markets.

“This additional capital will allow us to scale the technology to fully realize the potential of the nanolayer technology across many market segments.”

Originally developed with funding from the US Defense Advanced Research Projects Agency (DARPA) and aimed at military applications, the technology was released for commercial use in 2016. Other backers of the company include the defense giant L3.

Stacked and turned
Inside the GRIN components made by Peak Nano Optics, the ultra-thin polymer layers yield a different refractive index at different points in the lens structure.

PolymerPlus co-founder Michael Ponting has previously likened the structures to that of the human eye, where light rays are refracted by varying degrees as they pass from the front to the rear of the eyeball.

Based on thousands of alternating layers of different polymers, the refractive index of each layer in the optical component is determined by the ratio of the materials used, with a typical layer thickness of around 50 µm.

Those structures can then be stacked into sheets, from which shapes can be thermo-formed and diamond-turned, to create aspheric GRIN lenses.

Lenses with this built-in distribution of refractive index can then be used to replace much larger and heavier optical components made using traditional methods - and have been selected as a finalist in this year’s R&D 100 Awards.

As an example, Peak Nano Optics says that in a design for binoculars the GRIN lenses could be up to ten times thinner - and 80 per cent lighter - than standard glass doublet and triplet lenses.

In addition, the GRIN components are said to offer a tighter focus and reduced chromatic aberration, enabling a significantly wider field of view, all at a comparable cost.