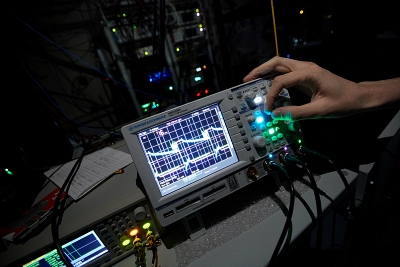 The QuTech collaboration, which is pioneering the application of quantum technologies in The Netherlands, has launched plans to build a high-speed quantum network connecting the Randstad metropolitan region.

According to project leaders at Technical University of Delft and the TNO research organization, the effort will focus on connecting quantum processors across a “significant” distance.

“The aim is to build the very first fully functional quantum network using high-speed fiber connections,” they announced. “A quantum network is a radically new internet technology, with the potential for creating pioneering applications.”

Optical channels
By connecting quantum processors to each other via optical channels, such a network would enable the exchange of quantum bits - the basic units of quantum information upon which quantum computers are built.

Also known as qubits, these units enable high-security quantum communication. QuTech says that these connections are expected to evolve over time towards a global quantum network, allowing additional applications in areas like position verification, clock synchronization, and computation with external quantum computers.

“Among other things, the project is intended to lead to new techniques, insights and standards that will bring a quantum network closer,” stated the collaboration, which also includes telecoms firm KPN, Dutch ICT development organization SURF, and a VU Amsterdam spin-out company called Optical Positioning Navigation and Timing (OPNT).

QuTech adds that all existing quantum networks are based on a simpler technology, suggesting that the new Randstad project will represent a “fully functional” approach.

“Different parties in the collaboration each contribute their own areas of expertise,” it announced. “Ultimately, the mix of skills will help to create a programmable quantum network that connects quantum processors in different cities.”

Quantum ecosystem
Erwin van Zwet, Internet Division Engineering Lead at QuTech, added: “Working with these partners, we expect to have taken significant steps towards a quantum network by the end of the project.”

Acknowledging that the technology required is still at an early stage, the four parties involved in the collaboration say that they stand to benefit from joining forces right now.

Wojciech Kozlowski, a postdoctoral researcher at QuTech with responsibility for one of the work packages defined in the project, said: “Every day we are working on finding answers to the question of how network operators, such as KPN or SURF, can deploy a quantum network, and what sort of services they can offer their users.

“Although we are still in an early stage of development, we are already building the quantum internet ecosystem of the future by working with key partners. This ecosystem will prove crucial as our quantum network evolves into a fully-fledged quantum internet.”

• The Dutch Research Council (NWO) has also awarded a new €4.5 million grant to an interdisciplinary consortium including QuTech aiming to bring quantum technology closer to potential users across society through the "Quantum Inspire" platform.

The platform, based around a 50-qubit quantum computer, is set to gain a more intuitive and easily accessible user interface, with a view to future commercial use.

Lieven Vandersypen, the director of research at QuTech, said that the new program would see greater availability of Quantum Inspire to students, the general public, industry, and government.

"We hope that different people from all parts of society will interact with Quantum Inspire, so that we can work together to figure out the full range of possibilities offered to our society by quantum computing – including which societal challenges it will be able to solve," Vandersypen added.