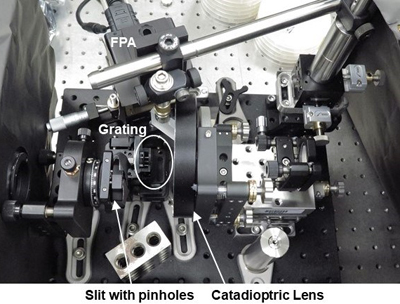 Compact spectrometer has a catadioptric lens with reflective and refractive parts.

Researchers at MIT Lincoln Laboratory have developed a new imaging spectrometer, which they say is “much lighter and smaller than state-of-the-art instruments while maintaining the same high level of performance.

Because of its small size and modular design, the new instrument is poised to bring this advanced analytical technique to airborne vehicles and even planetary exploration missions.

Imaging spectrometers record a series of monochromatic images that are used for both spatial and spectral analysis of an area. This analytical approach is widely applied in fields such as atmospheric science, ecology, geology, agriculture and forestry. However, the typically large size of these instruments has prevented them from being used in some applications.

The work has been reported in the Optical Society journal Applied Optics.

The researchers, led by Ronald Lockwood from MIT Lincoln Laboratory, describe their new Chrisp compact VNIR/SWIR imaging spectrometer (CCVIS) thus: “It has a volume about 10 or more times smaller than most of today’s devices. One version of the CCVIS measure 8.3 cm in diameter by 7 cm long, or about the size of a soda can.”

The spectrometer is designed to record spectral images over wavelengths spanning 400 to 2500 nm. This includes the visible and near infrared (VNIR) as well as shortwave near infrared (SWIR) portions of the spectrum.

“Our compact instrument facilitates the application of imaging spectroscopy for a variety of scientific and commercial problems, such as deployment on small satellites for planetary exploration or using unmanned aerial systems for agricultural purposes,” said Lockwood. “We believe that our new spectrometer could also be used to study climate change, one of the most exciting applications of an imaging spectrometer.”

Most of today’s imaging spectrometers use an Offner-Chrisp optical configuration because it offers excellent control of optical errors called aberrations, said the MIT Lincoln Lab team. However, this design requires a relatively large optical setup. The new CCVIS performs much like the regular Offner-Chrisp configuration but with new optical components that enable a more compact design.

To make the new CCVIS, the researchers used a catadioptric lens that combines reflective and refractive elements into one component. This created a more compact instrument while still controlling optical aberrations.

The researchers also used a special flat reflection grating that is immersed in a refractive medium rather than in air. This grating takes up less space than a traditional grating while maintaining the same resolution.

“The CCVIS uses a flat grating rather than a concave or convex grating that requires manufacturing with complex electron-beam lithography or diamond machining techniques,” said Lockwood. “We developed a grayscale photolithographic microfabrication approach that uses a one-time exposure to make the grating and doesn’t require labor intensive electron-beam processing.”

To test their new design, the researchers demonstrated the spectrometer using a laboratory setup. Their experiments verified that the CCVIS had the expected performance over the full field of view.

“The CCVIS’s compact size means that it can be made into modules that could be stacked to increase the field of view,” said Lockwood. “It also makes it relatively easy to keep stable with no temperature changes so that optical alignment, and thus spectral performance, remains unchanged.”

As a step toward the ultimate goal of a space-based demonstration, the researchers are seeking funding to develop a full prototype that could be thoroughly tested from an airborne vehicle.