Carefully tailored wavefronts might assist in deep-tissue imaging and optogenetics. 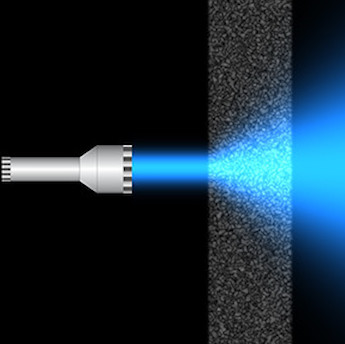 Imaging in disordered materials such as biological tissues or the atmosphere is complicated by the inherently inhomogeneous refractive index, reflecting much of the incident light back and hindering the gathering of information.

One theoretical approach to the problem has involved optimizing the wavefront before it enters the medium in a way which suppresses reflection, a scenario in which the mathematical properties of coupled light referred to as eigenchannels are manipulated by suitable spatial light modulators (SLM) before the beam reaches the target material.

A project at Yale University and Missouri University of Science and Technology has now proved the point, and demonstrated how a suitably manipulated laser beam was able to penetrate a layer of white paint, making its way through the material without experiencing the same dispersion as an unmodified beam of light. The work was published in Nature Photonics.

"Typically, an optical beam propagating through a diffusive medium such as fog will spread laterally, but we have discovered that a special preparation of the laser beam can transmit all incoming light without lateral spread," commented Hui Cao of Yale.

Past efforts to image within opaque materials have involved attempts to decode the speckle pattern produced by a scattering medium, or apply phase conjugation to extremely small numbers of photons.

Cao's own previous work on controlling the properties of light includes a method to switch a vertical-external-cavity surface-emitting-laser (VECSEL) between high-coherence and low-coherence operation, potentially allowing two distinct bioimaging techniques to employ the same laser source.

The new Yale finding could have an impact on deep-tissue imaging methods and the manipulation of light–matter interactions inside turbid media, for optogenetics and other technologies.

In the current study, researchers began by creating numerical simulations of the interaction between a wavefront and an opaque material, and discovered that the spatial profile of the eigenchannels—effectively descriptions of the ways that light energy is inclined to be dispersed in a medium—could be spatially localized, occupying only a fraction of the theoretical degrees of freedom available across the width of the material.

They then set about looking for experimental evidence of this transverse localization, by measuring the spatial profiles of individual eigenchannels at the input and output surfaces of a slab of scattering material, in this case a 10-micron layer of zinc oxide nanoparticles akin to white paint, applied to a two by two-centimeter glass substrate.

A suitable SLM modified the wavefront of a 532-nanometer laser beam so that the incident wavefront at the front surface matched the desired phase pattern, and a CCD camera recorded the changes to the intensity profile arriving behind the material.

Results showed that a correctly profiled beam could be indeed more concentrated, effectively with more light per volume inside and behind the opaque material. The same principle should hold for other materials in which the laser would be similarly scattered, potentially including biological tissue, fog, paper, and milk.

"Our method works for any opaque medium that does not absorb light," Cao said.