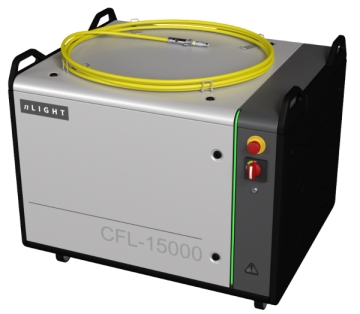 Vancouver-based nLight, which makes high-power semiconductor and fiber lasers, has reported a sharp drop in sales, with the slump expected to continue into the closing quarter of 2018.

For the three months ending September 30, the company posted revenues of $43.8 million, down 14 per cent on the same period last year.

CEO Scott Keeney told investors that a slowdown in microfabrication applications and competition in the Chinese industrial sector had dragged on sales. And those trends looks set to continue for the rest of this year, with nLight's executives anticipating revenues to drop to between $36 million and $40 million in Q4.

Powering up
On the plus side, nLight reported a sharp increase in sales of its higher-power sources. Similar to the trend noted by its key rival IPG Photonics, Keeney said that revenues from lasers producing 6 kW or more jumped 26 per cent year-on-year, and now accounted for around 40 per cent of the company's fiber laser sales.

But with competition ever fiercer at lower power levels, nLight is focusing on driving industrial business outside of China, and on its "Corona" range of programmable fiber lasers.

"We continue to gain significant traction on the design win front with Corona," Keeney told an investor conference call discussing the latest results, adding that there would be evidence of growing customer adoption at next week's Fabtech expo in Chicago - a key trade show in the industrial materials processing calendar.

"We are particularly proud to have secured our first global tier-one design win with Corona," added the CEO, who expects revenues from that deal to ramp up by the middle of next year.

Another continued bright spot is the aerospace and defense sector, where nLight saw sales rise 13 per cent year-on-year in the latest quarter. "We're even more encouraged by the clear trend towards utilizing lasers in high-energy defense applications," Keeney said.

While there is renewed hope of a resolution in the US-China trade war, the effect on nLight's profits is becoming more significant as sales tick down. For the quarter just reported, tariff costs of just over $1 million tipped the company to a net loss of $0.8 million.

"There is definitely an impact," Keeney told investors. "[Our] revenue is going down, but the dollar [impact] of the tariffs stays roughly the same."

nLight is hoping to offset those effects through higher sales of its more advanced, high-margin products like the Corona, and some more new launches.

New lasers for welding
Simultaneous with its financial results, the company announced what it called "two key additions" to the Corona family, including one that raises its power output from 8 kW to 12 kW.

"The enhanced CFX-5000 increases thin metal cutting speed by 20 per cent while preserving CO2-like quality for thick mild steel cutting," added nLight, whose Corona sources adjust the size and shape of the output beam depending on the requirements of each application.

"Users can choose from small-diameter, top-hat beams to large-diameter, donut-shaped beams without the cost, complexity, or reliability risks inherent to free-space optics," explains the firm.

In addition to the two new Corona products, nLight has just introduced a portfolio of fiber lasers aimed specifically at welding applications. Available with an output power ranging from 3 kW to 15 kW, they come with an integrated fiber coupler or beam switch optimized for welding, cladding, and robotic installations.

That feature is said to offers users the flexibility to integrate a fiber coupler or 2- or 4-port beam switch for "plug-and-play" fiber replacement, while the lasers also come with the back-reflection protection needed when welding reflective materials like copper and copper alloys.

That is important for what is expected to become a huge market for laser welding of batteries for electric vehicles. It's an application area that IPG Photonics is also targeting, and one which the fiber laser market leader's CFO Tim Mammen recently described as being on the cusp of a "decade-long investment cycle".

Unlike laser cutting, battery welding is a relatively complex area, with different laser processes needed, depending on the exact nature of the battery materials and form factors designed by each manufacturer.

• nLight's stock price was little changed in pre-market trading following the latest results and company outlook. However, at just under $15 it remains significantly down on the highs reached shortly after its initial public offering (IPO) in April 2018.