Power Transmitted Over Laser field demo earlier in 2019 has implications for remotely powering drones and more. 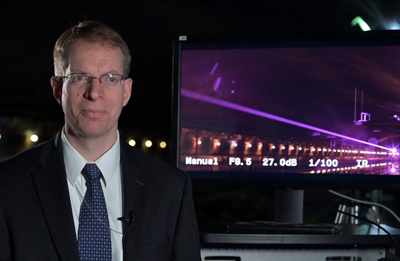 What is believed to have been the first field demonstration of a laser-based, long-range, free-space power beaming system was successfully performed at the David Taylor Model Basin at the Naval Surface Warfare Center in Bethesda, Maryland.

The experiment – witnessed by a group of attendees who could not actually perceive the multi-kilowatt infrared beam – comprises two 4m (13ft)-high towers, a 2kW laser transmitter, a receiver featuring purpose-designed photovoltaics. In the demonstration the laser transmitted 400W across a distance of 325m, between transmitter and receiver. Although the laser beam would usually be invisible to the naked eye, its path was captured by a specially-adapted camera.

At one end of the of the test facility the receiver converted the laser energy to DC electric power, which in turn was converted into AC power to run lights, several laptops, and a coffeemaker that the Naval Research Lab (NRL) organizers used to make coffees for the guests, dubbed “laser lattes.”

NRL commented drily, “As more than one observer noted, it wasn’t exactly an exciting scene. But when you’re transmitting hundreds of watts of power with a laser beam exciting is not what you’re aiming for. You want it quiet, boring and, most importantly, safe. And so it was.”

“Power beaming, the concept, has been around for decades and there’ve been laboratory demonstrations, but this is really a first and a new technology that's getting fielded,” said Tom Nugent, CTO of PowerLight Technologies, the hardware provider for the Power Transmitted Over Laser (PTROL) project.

This demonstration, earlier in 2019, which was the culmination of the PTROL project’s second phase, was two years in the making for PowerLight and Paul Jaffe, an electronics engineer with the NRL.

At NRL, Jaffe has been conducting space-based solar energy research for more than a decade, focusing in part on transmitting solar energy from space to Earth. One of the biggest challenges he and others working on the problem have faced is the enormous sizes required for the transmitter and the receiver. 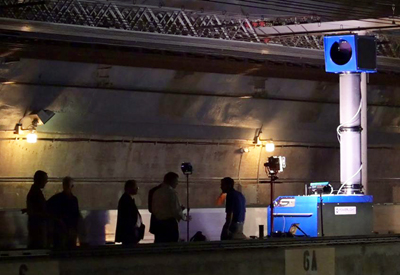 Safety zone: attendees at the PTROL laser demo beside the 2kW source.

“Radio waves have a fairly long wavelength and in order to steer them effectively you need a really big antenna,” he explained. “But as the wavelength gets shorter, as it does for infrared light, which is what we're using now, the transmitter and receiver can be much, much smaller.”

The photovoltaics of the receiver are similar to those of a typical solar panel, Jaffe said, though they are designed to be sensitive to the particular wavelength of the laser, rather than the broad spectrum of sunlight. They convert that wavelength with much greater efficiency than would a regular solar photovoltaic.

Jaffe hailed the power beaming system as “a remarkable new capability,” adding, “it could unlock all kinds of amazing possibilities for the Department of Defense and the private sector.

“Imagine using it to send power to locations that are remote, hard to reach or lack infrastructure. Another potential application of the technology would be powering drones (UAVs), whose flight time is currently limited by their on-board battery life. The third phase of the PTROL project will involve using power beaming to send power to a flying UAV.”

“If we had a way to keep drones and UAVs flying indefinitely, that would have really far-reaching implications. With power beaming, we have a path toward being able to do that,” he said.

Also present for the demonstration was Eric Follstad with Transformation and Concept Development at U.S. Central Command. He compared the proposed UAV power beaming capability to air-to-air refueling for manned aircraft. “I think this is just a logical extension of that concept,” Follstad said. “Now we can do ground-to-air recharging of some of these electric platforms that we've been flying.”

Also according to Jaffe, power beaming could also make possible the transmission of power from solar-energy-collecting satellites in space to the ground, wherever needed — whether a forward operating base, a developing country, or a refugee camp. The power for the NRL demonstration came from an electrical outlet in the building.

The most notable aspect of the demonstration, however — according to Jaffe and Nugent — was the technology’s integrated safety systems. No one in the test facility was required to wear laser safety goggles or any other kind of safety gear, including the personnel operating the system. To put that in perspective, a typical laser of just 0.5W is specified to require protective eyewear.

In the future, PowerLight intends to increase the wattage the laser beam can transmit, increase the distance the system can send it, and improve the system’s overall efficiency. Nugent said he wants the process of operating it to be as simple as flipping a light switch or plugging in an extension cord.