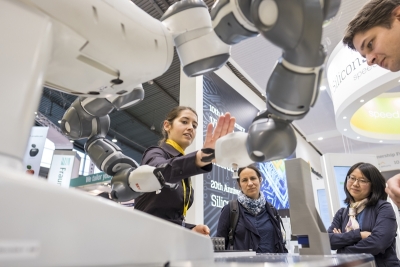 Machine vision specialist Cognex has confirmed a sharp decrease in sales and profits in its latest quarterly results, attributing much of the dip to the sluggish consumer electronics market - and smart phones in particular.

At $183.3 million, revenues were in line with the Massachusetts company's expectations, but down one-fifth on the same period last year.

And although Cognex saw much stronger demand from some markets - notably the logistics sector, where vision-enabled robots are displacing humans in warehousing operations - that was not enough to offset the wider weakness.

Persistent uncertainty
Addressing an investor conference call to discuss the latest results, company CEO Robert Willett said: "The decline can be almost entirely attributed to consumer electronics, which decreased by approximately $50 million, roughly 50 per cent from Q3 of 2018."

Willett added that the automotive and the broader industrial sectors also continued to weaken due to what he called "persistent global economic uncertainty and trade conflicts, particularly in Europe and China".

That weakness had a clear impact on Cognex's bottom line, although thanks to an enviable competitive position the company remains highly profitable. For the three months ending September 30, it posted a net income of $41.7 million, down from $80.4 million a year ago.

Despite all that, Willett said that he still expects the company's sales to grow at a compound annual rate of some 20 per cent over the coming years, as vision-enabled automation becomes ubiquitous.

"For the first time, machine vision is reaching a level of performance that allows it to replace tens of thousands of humans globally, whose work it is to perform highly repetitive visual inspection tasks," the CEO told investors.

Cognex founder Robert Shillman added: “We’re very excited to welcome the Sualab team to Cognex; they are a great fit for our work hard, play hard and move fast culture.”

Industrial inspection
Willett estimates that although the market for machine vision based on deep-learning techniques for factory automation is only worth around $75 million at present, that figure is set to grow rapidly, near-doubling each year.

"The acquisition of Sualab not only extends our deep-learning capabilities for inspection application, it more than triples the size of the Cognex team dedicated to developing and applying deep-learning technology to industrial inspection tasks," he said, pointing out that the company now had around 100 more employees working on the subject.

While that is an effort that ought to pay dividends in the medium- and long-term, the more immediate future remains subject to ongoing weak demand. And with a major order from a logistics customer also now subject to delay, Cognex's executive team is anticipating a further sequential decline in revenues for the closing quarter of the year.

• Following the latest update, Cognex's Nasdaq-listed stock price dipped in value slightly, although it remains close to long-term highs reached over the past couple of years. Closing the October 29 trading session a shade under $52, the company commands a market valuation of nearly $9 billion.