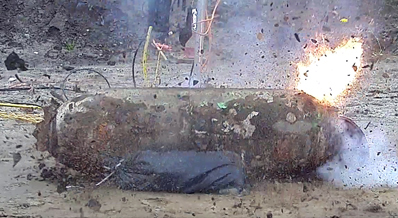 A German research project, known as DEFLAG, to develop a laser-based technique to decommission unexploded munitions, which concluded earlier this year, has been hailed as a success, with the final field trial safely neutralizing a live 500-pound (227kg) bomb.

Scientists working on the joint project, which involved Laser Zentrum Hannover, Laser on Demand, an LZH spin-off applications and laser equipment hire company, also based in Hannover, and the Kampfmittelräumdienst Hamburg (KRD: Bomb Disposal division of the Hamburg City Fire Service), said DEFLAG has been “more than successful".

The team concluded that the laser-based approach, developed over the past several years, could provide more security for explosive ordnance disposal technicians in the future. 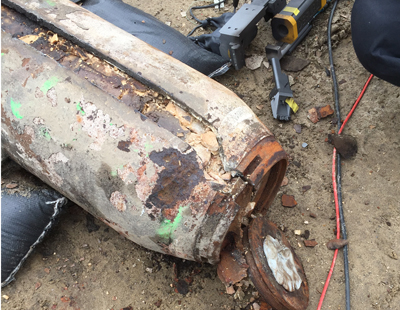 The otherwise unpredictable detonator pops out after ignition by laser.

The deflagration (disarming) attempt at the blast site went according to plan: instead of a large detonation, after laser incisions were made in the casing, the chemical detonator popped out of the 500-pound bomb, the shell casing split along the laser-cut predetermined notch and only a very small part of the explosive actually exploded.

In the DEFLAG project, scientists from LZH developed the process for automated deflagration. In the first step, a notch is made into the bomb’s casing using a solid-state laser delivering 2kW of power. In the second step, the explosive is deflagrated in a controlled procedure.

As the deflagration system technology is typically exposed to strong heat and pressure during the process, the LZH and Laser on Demand developed a low-cost, 3D-printed laser processing head with standard optical components. The handling of the ordnance and of the explosives in the field trials as well as the final field trial with the 500-pound bomb were carried out by the staff from the Bomb Disposal division of the Hamburg City Fire Service (KRD). 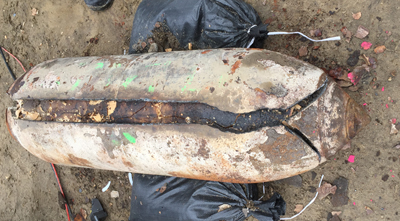 Next step: Underwater use

LZH commented, “These promising results are now the basis for further research projects in order to be able to use the procedure as soon as possible.

In addition, the partners want to adapt the process and the system technology for underwater use. For more than 1.5 million tons of World War II ammunition is still suspected to lie on the seabed under the North and Baltic Seas.

The DEFLAG project "Safe Deflagration of Duds by Laser Technology" was funded by the German Federal Ministry of Education and Research within the scope of the Federal Administration’s Research for Civil Security 2012-2017 program. Hamburg KRD is an associate partner.