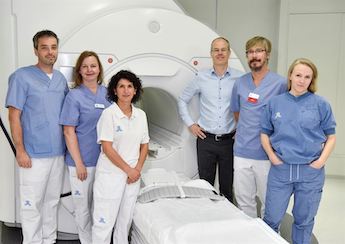 A patient at Karolinska University Hospital has become the first person in the Nordic region to receive laser ablation surgery for the treatment of a brain tumor, according to the hospital.

The operation was carried out in September 2019, and the patient was discharged the following day with only a single stitch covering the site of the incision, evidence of the laser-based procedure's potential for less intrusive brain surgery.

According to a hospital statement, the treatment is "minimally invasive, with the neurosurgeon placing a small laser catheter in the target tissue through a 3.2 millimeter drilled hole in the skull. The laser is then activated, generating heat that ablates the tumor tissue. The treatment is performed under MRI guidance, ensuring destruction of tumor tissue while avoiding harm to surrounding normal brain tissue."

Laser ablation has been an attractive route to removal of cancerous tissues and other dangerous lesions in parts of the body such as the lungs and prostate for some time, with brain surgery an obvious extension of the same principle. But development of suitable optical probes able to reach the areas of interest, along with appropriate imaging techniques to guide the surgeon has required painstaking research on several fronts.

The procedure as currently developed involves using a MRI procedure to verify the location of the laser fiber, and then MRI thermography to monitor and guide the ablation of tissue at the point of focus.

The system used at Karolinska University Hospital was the Visualase platform, originally developed by the company of the same name and which has been available in the US for several years, but only received CE approval for use in Europe in 2018.

Visualase was founded in 2005 as a spin-out from medical device vendor Bio Tex, which was developing a laser-based surgical platform for clinical uses. The first small-scale trial of the system for laser ablation of brain metastasis was carried out in Paris in 2007, employing a 15 Watt 980 nanometer diode laser as the light source, with the patient positioned in a magnetic resonance imaging system.

Its first use in the US took place in 2010 at the Robert Wood Johnson Medical School in New Jersey, where it was used to treat a specific type of recurring malignant tumor known as an intracranial ependymoma.

Speaking at the time, surgeon Shabbar Danish described the procedure as being "a tool for patients with tumors who have been told they do not have other options, and a viable option for patients who do not want radiation therapy or general anesthesia."

The Visualase company was acquired by Medtronic, which was already an investor in the company, in July 2014 for $70 million with an additional $35 million contingent on subsequent progress.

More recently the principles behind the laser ablation procedure have been applied to treatment of epilepsy, in particular for laser interstitial thermal therapy (LiTT) on solitary lesions in the brain's temporal lobe.

The first European treatment of an epilepsy patient in this manner took place in August 2018 at Lausanne University Hospital, improvements in imaging, surgical navigation, and in particular real-time thermal control having progressed to the point where LiTT was considered an increasingly feasible alternative to drug-based therapies.

Visualase was one of the two commercial LiTT platforms at that time. The other was NeuroBlate from Monteris Medical, the subject of a Class I recall from the FDA in March 2018 due to overheating issues in certain clinical scenarios. In January 2019 Monteris indicated that the problem had been dealt with.