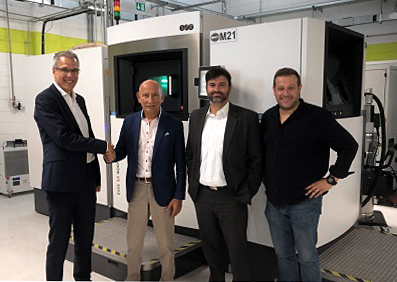 Beaming: EOS and BEAMIT executives at the installation of the new AM system.

BEAMIT, an additive manufacturing company said to have the largest fleet of such machines in Europe, has installed its fourth EOS M 400-4, a quad laser system designed for the industrial production of high-specification metal parts. The system will be used to manufacture components for the oil and gas industry.

Mauro Antolotti, Chairman of BEAMIT, commented, “Industrial 3D printing has proven to be a real revolution for countless industrial sectors and we see even more viable potential. So we are delighted to scale our 3D printing production capabilities by strengthening our collaboration with EOS."

Markus Glasser, Senior VP Regional Exports at EOS added, “BEAMIT’s success with 3D printing represents an important example for companies of any size that want to operate in Industry 4.0 and are already getting ready to change their business thanks to the advantages offered by additive manufacturing."

For more than two years BEAMIT has been using EOS range of technologies. In 2017, BEAMIT was the first company in Italy to deploy the EOS M 400, the sister system of the newly-installed EOS M 400-4.

By this means, the 400-4 effectively multiplies the capacity of the EOS M 290, while ensuring that the proven technique of Direct Metal Laser Sintering quality is delivered. EOS M 290 processes can be transferred to the EOS M 400-4 while retaining equivalent part properties.

BEAMIT, based in Fornovo di Taro, Parma, about 100 kilometres west of Bologna, claims to be the industrial manufacturer with the largest portfolio of AM machines in Europe, whether for plastic prototyping to additive printing in metal.

The company stated, “BEAMIT came into being on the foundations of ProtoService, a company that wrote the history of rapid prototyping in Italy. Since 1997, it has been establishing collaborations with prestigious companies in the aeronautical, aerospace, motor racing, and industrial production, as well as universities and research institutes.