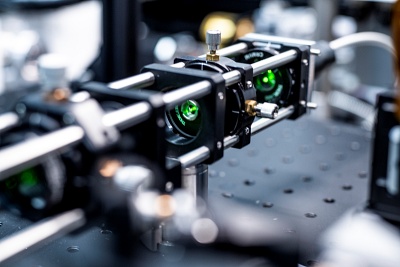 Three research and development teams have been shortlisted for the 2022 Deutscher Zukunftspreis (German Future Prize), with optics innovation once again featuring prominently.

This year’s finalists include a team from optics giant Zeiss that developed the firm’s “Lattice Lightsheet 7” microscope - a tool that enables three-dimensional, super-resolution imaging of living cells without causing photodamage.

Also nominated are a team from the Fraunhofer Institute for Solar Energy Systems (IES), whose “ChargeBox” enables rapid charging of electric vehicles, and a collaboration that has developed a way to track patient position precisely during radiotherapy, promising more effective cancer treatment.

This year’s winner will be revealed by German President Frank-Walter Steinmeier on October 26, with the winning team set to feature in a live broadcast of the ceremony shown on German TV station ZDF.

Lattice lightsheet
The Zeiss technology is based around the approach to super-resolution microscopy that was pioneered by 2014 Nobel laureate Eric Betzig, who shared that year’s chemistry award with Stefan Hell and William Moerner.

Although various super-resolution techniques were able to produce images beyond Abbe’s classical diffraction limit - that is, smaller than the wavelength of light used to probe a sample - a recurrent issue was the power of the laser typically used to create those images.

Most super-resolution techniques result in a relatively high photon flux hitting the sample, making the approach unsuitable for living cells that would effectively be “cooked” by the incident light.

Betzig’s idea was to instead use “lattice lightsheets”, which reduce the phototoxicity of the technique dramatically, while retaining the ability to beat the diffraction limit.

“By combining imaging that protects samples with high resolution, the system allows researchers to observe sub-cellular dynamics in three dimensions over hours and days, which was not previously possible with other microscopy technologies,” reports the Zeiss team.

That opens up new possibilities, such as for cancer research, understanding life at its earliest stages, or watching how cells respond when attacked by viruses or bacteria.

“Especially with infectious diseases, studies must be conducted on a living system if you want to gain new insights," said Kalkbrenner, speaking on behalf of the team in a release from Zeiss. 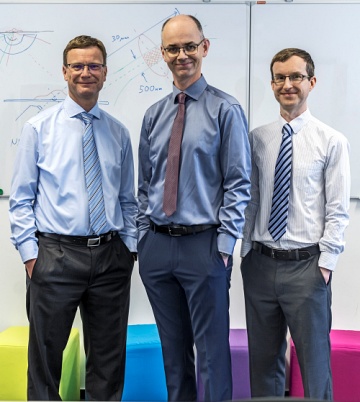 Malaria and cancer studies
Kalkbrenner, who leads the team, is also lead architect for these kinds of microscopes in the Carl Zeiss Microscopy business unit. Siebenmorgen is a project manager in the firm’s Advanced Development division, while Wolleschensky heads up that division.

They say that potential users have been involved from an early stage, helping to test the system and provide valuable input.

Zeiss says that one group in Melbourne, Australia, used the system to study the malaria parasite, thought by the World Health Organization (WHO) to be responsible for almost half a million deaths annually.

That group, one of the first to use the Lattice Lightsheet 7, was able to image the micron-sized parasite as it invaded a living blood cell. “For the first time, it was possible to study different stages of this highly complex parasite's life cycle live and in three dimensions,” says Zeiss.

Another team at Julius Maximilian University in Würzburg have used the system to study immunotherapy, a relatively new treatment for cancer.

Critical to the success of the light sheet approach is reducing the intensity of laser used to generate fluorescence.

“This intense illumination can permanently damage living cells,” says Zeiss. “Unlike all other microscopes, the laser beam – in the form of a light sheet – is applied only in the area within focus of the objective lens.”

Novel microscope optic
Although that works well for larger organisms, the laws of optics still restrict its use in cell biology. "We have to rein in the laser in a special way so that light only goes where a researcher wants to look and without unduly damaging cells," explains Kalkbrenner. "So we built on the idea of lattice light sheets from Nobel Prize winner Eric Betzig and took it further."

That development has included further optics innovation. Zeiss says that the microscope team had to completely rearrange the objective lenses, because cells grow on the cover slips in culture vessels like Petri dishes or multiwell plates.

As a result, they developed a completely new type of microscope optic that provides a view through the sample vessels at an angle, and from below, thus eliminating optical artefacts.

It means that multiwell plate formats, important for the development of active agents in high-throughput screening, are now compatible with light sheet microscopy for the first time, inside an easy-to-use, compact system with high automation potential.

Optics and photonics has featured heavily in previous editions of the German Future Prize: winning technologies have included extreme ultraviolet (EUV) lithography in 2020, industrial ultrafast lasers in 2013, organic light-emitting devices in 2011, and regular LEDs in 2007.