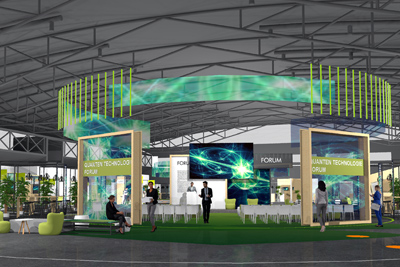 World of Quantum will combine a broad lecture program and diverse exhibition.

Messe München has announced the launch of World of Quantum. Because many quantum solutions originate from photonics, World of Quantum will be launched alongside Laser World of Photonics 2022 – between April 26-29, 2022 – which is taking place for the 25th time.

“The quantum community is calling for a trade fair platform. The time is right for World of Quantum,” said Anke Odouli, Exhibition Director for Laser. She noted, “The coffers for subsidies are full, whether it be in Europe, Asia or the U.S. Research associations are being set up.

“Top institutions, global groups, innovative medium-sized companies and start-ups are shaping the dawn of a new quantum age with futuristic ideas, solutions and research approaches. Like in 1973, when Messe München invited the young photonics community to the first Laser event, it is now offering quantum pioneers a trade fair platform for presenting their latest products and networking.”

“We’ve reached a point in quantum computing where this technology no longer belongs just in the laboratory,” said Dr. Walter Riess, Head of the Science and Technology department at IBM Research in Zürich, which has already received two Nobel prizes. By 2023, the group would like to build a quantum processor with over 1,000 qubits. By then, the expert expects to see applications which classic computers are unable to cope with.

This also applies to quantum communication and sensors which, as enabling technologies, not only open up new possibilities in the area of sensor systems and allow absolutely reliable communications but also offer great potential for rapid change in the relevant markets. “It’s a good idea to be involved from the start and seek contact with others. A trade fair such as World of Quantum is the ideal meeting place,” said Riess.

Prof. Immanuel Bloch, of the Munich Center for Quantum Science and Technology, commented, “The trade fair offers a platform for networking and ideal starting points for companies looking to get involved in this growing, highly technological field.” Prof. Bloch believes that World of Quantum is starting just at the right time: “The basic research has already led to significant progress in the field of quantum technologies. What we need now is for industry to get involved in order to push back the boundaries of what is possible.”

And CEO of Alpine Quantum Technologies, Dr. Thomas Monz, believes that quantum technology is breaking out of laboratories into the “public domain” and is faced with new, application-oriented challenges. This means that it’s now time to establish interfaces and standards with a view to integrating quantum computers into computing centers.

“Who knows – at the next Laser show after this, the timetables for public transport could be optimized with the help of quantum algorithms, while simulations on quantum computers could make new batteries for your electric car possible,” he said. “The quantum revolution is coming. It’s now important to get companies and employees ready for it. World of Quantum offers an opportunity to do just that.”

World of Quantum will be launched with a sophisticated health and safety concept that has proven successful at other recent in-person Messe München events. A hall concept developed specially for the premiere offers a range of exhibition formats tailored to the needs of research associations, quantum clusters, global players, medium-sized solution providers and start-ups.

Many of the companies are long-standing exhibitors at Laser World of Photonics. They include Toptica Photonics, whose President Dr. Wilhelm Kaenders regards the launching of World of Quantum as part of the world’s leading trade fair for photonics as a logical development: “Just like studying the properties of the photon played a central role in our understanding of the quantum properties of nature, the photon will play a central role when it comes to implementing quantum technologies in the future,” he said.