The industry group representing photonics in Europe agrees to a four-fold leveraging of initial public funding for technology development. 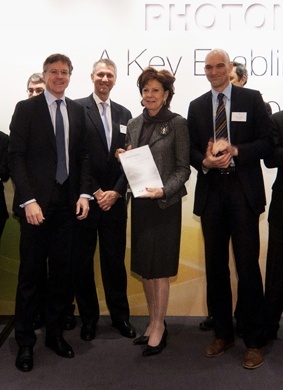 Photonics21, which includes more than 1800 representatives of photonics industry and science in Europe, has proposed a €7 billion public-private partnership (PPP) investment to deliver technology innovation and commercialization on a scale not seen before in the continent.

As part of the forthcoming “Horizon 2020” program, Photonics21 said that the European photonics industry would provide a private-sector investment amounting to four times the initial funding from the European Commission (EC).

That would amount to private sector investment of €5.6 billion over seven years. And when combined with a requested public provision of €1.4 billion, the total investment in photonics innovation under the plan would be €1 billion per year from 2014 until 2020 – if all goes according to plan.

“The proposed €7 billion partnership between Photonics21 and the European Commission would represent a substantial contribution by this sector towards future growth and job creation, and significantly assist the EU’s continued economic recovery,” Harbour said. “It will be a major boost for the roll out of the Innovation Union.”

Strong Commissioner support
Speaking to optics.org about the financial pledge, Photonics21 spokeswoman Ursula Tober stressed that the agreement was at the proposal stage, and was “not yet a done deal”. Much remains to be negotiated, including agreement by the European Council of the total top-level funding for research and development across all sectors for Horizon 2020, before an amount for photonics can be finalized.

But by March 2012, when Photonics21 will host its next annual meeting, the group hopes to have agreed details of how the PPP would work in practice, outlined key objectives, and proposed key performance indicators (KPI) to ensure that the impact of the money being invested can be closely monitored – seen as one of the weaknesses of current European spending on research and development.

Neelie Kroes, European Commissioner for the Digital Agenda, and a keynote speaker at the 2011 Photonics21 annual meeting in February, has already expressed her support for the photonics PPP idea. In a private letter sent to Photonics21 executives in July, Kroes wrote: “I value the strong commitment from the photonics industry to creating economic growth and jobs in Europe, as well as the proposed four-fold leveraging of the initial public funding and the monitoring of its impact through KPIs.”

“I appreciate in particular the clear emphasis on addressing the full research and innovation chain from materials to pilot actions – I conclude that the necessary ingredients are in place to justify the creation of a PPP in photonics.”

Investment along the value chain
One of the main aims of the funding proposal is to enable closer alignment of industrial and scientific priorities within photonics, and to generate a better conversion of scientific discoveries into real-world applications and commercial technologies in Europe – long seen as a weakness in relation to technology development in both North America and Asia.

Although photonics is estimated to be worth nearly €60 billion to Europe each year directly, employing 300,000 people and acting as an enabling technology to as much as 30% of the entire European economy, there is a widespread acknowledgment that many promising technologies do not make it through to full commercialization.

Giorgio Anania, a VP on the Photonics21 executive board and a member of the EC’s “high-level group” for key enabling technologies (KETs), said: “Photonics innovation in Europe tends to fall through in the stage between successful science and pilot-scale industrial deployments – the latter being the stage at which jobs can start being created.”

That “valley of death” scenario is a key focus of the KET high-level group’s recent report for the EC on how KETs ought to be supported in Europe in the forthcoming budget framework starting 2014. It proposes a “three-pillar” strategy to cross the valley of death – with attention focused on the pillars of technological research; product development; and world-class, advanced manufacturing.

Funding directed throughout the innovation value chain in that way would represent a significant departure from the historical EC funding strategy of supporting early-stage research in photonics that has been a feature of previous and current “framework programme” mechanisms.

Key recommendations for key enabling technologies
The KET high-level group made ten recommendations to the EC in its report, including positioning KETs as a technological priority for Europe in the scope of its next budget, which covers the 2014-2020 time period. The technological development part of that budget is known as Horizon 2020, and officially referred to as the Common Strategic Framework (CSF) for research and innovation financing.

“The EU should recognize the need for the full and simultaneous implementation of the three-pillar bridge model along the innovation chain, from basic research, through technological research, product development and prototyping up to globally competitive manufacturing,” writes the high-level group in its executive summary to the report.

One of the key recommendations is for the EC to adopt the industrially recognized Technological Readiness Scale (TRL) scale, in accordance with standard OECD practice, while the high-level group also calls for a “radical rebalancing” of funding in KET-related programs, towards the establishment of pilot manufacturing lines and product prototypes. Such a change in emphasis from early-stage funding is seen as necessary to compete globally and maintain a manufacturing base, against the emergence of hugely powerful companies in Korea and China, where vast resources can be channeled towards manufacturing efforts much more directly.

The upshot in Europe would be far greater industry control of the EC’s technology investment programs, with the KET high-level group recommending that industry has a minimum 50% participation on respective program committees.

Another of the main recommendations from the KET group is that Europe adopts a globally competitive policy on intellectual property (IP) that gives a clear plan for IP exploitation to the consortia working on technology programs – citing the highly influential 1980 Bayh-Dole Act in the US as an example to follow.

But before all that can happen, the members of the EU have to agree on how much money it will commit to the next EC budget, how much of that will go towards the CSF, and how much to supporting the various KETs – while in the midst of a sovereign debt crisis that is currently threatening to seriously disrupt the financial union provided by the euro currency.

The proposal is for a significant increase in research and innovation spending to €80 billion for the forthcoming CSF. That proposal goes to the European Competitiveness Council in early December – a meeting at which some key decisions impacting the future of photonics development in Europe will likely be made.