Heliatek has once again delivered a record-breaking efficiency for organic photovoltaics (OPV), with its 9.8% tandem cell performance verified by the Fraunhofer Institute for Solar Energy Systems (ISE).

The new world best from the stacked cell, small-molecule design represents a significant jump from the 8.3% level that the German start-up reported last year and, while Mitsubishi Chemical has claimed conversion efficiency in excess of 10% for its own tandem device, the Japanese firm's figure is yet to be confirmed by an independent laboratory.

But perhaps more significant than any specific efficiency claims is Heliatek’s insistence that this is not simply another “hero” performance. Co-founder and CTO Martin Pfeiffer told optics.org that Heliatek had produced dozens of cells in a number of small-scale production runs, delivering an average efficiency of 9.5 (±0.3)%.

Perhaps even more importantly, the performance has been shown to be scalable, while all of the chemicals used to produce the latest cell are said to be available in quantities that will support pilot production (Pfeiffer says that even the C60 “buckyball” fullerenes used in the cells are not too expensive). As is normally the case, the record-breaking cell itself is tiny, measuring just 1.1 cm2. But increasing the cell size by a factor of 120, to regular module size, only reduces efficiency to 9%. 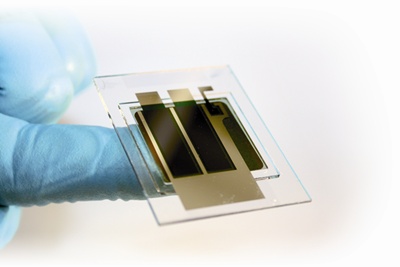 Lab to fab
That 9% large-cell performance has translated to 7.5% module efficiency, which Pfeiffer describes as “by far the best so far” shown by OPV modules, thanks to better morphology and a much-improved fill-factor. In the future, the latter can be further optimized, but to reach Heliatek’s long-term goal of 15% efficiency, the key will be to extend the wavelength range over which the cell absorbs sunlight.

Pfeiffer says that the fullerene materials used currently are less effective in the blue and near-infrared ranges, but that this can be overcome relatively easily by incorporating slightly different chemicals to expand the absorption range by around 100 nm.

The CTO is expecting even better performance when the company begins to imitate approaches already used on volume organic LED display production lines by the likes of Samsung, which will help to further improve material homogeneity, while tools such as laser scribers will also reduce efficiency losses.

Comparing Heliatek’s latest result to that from Mitsubishi Chemical, Pfeiffer pointed out that the Japanese company’s approach relied on multiple high-temperature production steps, and is therefore only compatible with relatively expensive substrate materials. In contrast, the Heliatek tandem cells rely entirely on low-temperature deposition processes, which are fully compatible with production on low-cost plastic foil.

Heliatek will start manufacturing the tandem cells in the second half of next year, when it expects to switch on a 2-3 MW capacity pilot production line and to prove that OPV cells can make the successful transition from lab to fab.

Financing a production ramp
Thibaud Le Séguillon, Heliatek’s CEO since September 2011, has another major challenge in the meantime: raising between €40 million and €60 million to finance Heliatek’s future transition to truly volume production and a capacity of 50 MW. Le Séguillon told optics.org that he already has a commitment from an existing partner, and is now looking for a lead investor for the funding round.

Clearly, with high-profile bankruptcies and a banking crisis in Europe, now is not the greatest time to be trying to attract finance in this sector. But Le Séguillon points to Heliatek’s ability to raise €18 million during the 2009 recession as a signal of the compelling investment story that it can tell. At the same time, the CEO acknowledges that Asia is a better place to pitch to than Europe right now, and that cash-rich companies there may be a more likely source of capital than venture groups.

On the subject of cost, Le Séguillon points out that the use of PET plastic foil provides one major advantage over conventional PV – the highly predictable cost of the substrate material – compared with silicon. And while the organic molecules that form the light-absorbing layers of the cell are still relatively expensive, the CEO expects these costs to drop dramatically as organic LED technology increasingly scales up and they become available in much larger volumes. The presence of chemicals giant BASF as an investor appears to back that view.

Getting competitive
But as the cost of conventional PV continues to slide, is there a danger that the window of opportunity for OPV is closing? Le Séguillon thinks not. “We do not want to compete with China,” said the CEO. “But we will be cost-competitive.”

What that will mean in practice – if Heliatek’s predictions are correct – is that its OPV technology will cost just €0.50/W (peak) by 2016, after the planned ramp in production and yield improvements.

By then, other forms of PV will likely have breached that price point. But what Le Séguillon and Pfeiffer are aiming to do is open up new markets unsuited to conventional silicon and thin-film PV modules. The “sweet spot” will, they hope, be in building-integrated photovoltaics (BIPV), a market that is yet to take off and in which there are many issues yet to be solved. But it is clear that BIPV can take advantage of one of OPV’s key attributes – the promise of extraordinarily thin and lightweight modules.

Much as an organic LED display or lamp has a “wow” factor in its potential for ultra-thin products, Le Séguillon says that a square meter of OPV module based on a PET substrate will be just 1 mm thick and weigh only 0.5 kg – no more than a small bag of sugar. Classic crystalline silicon modules are more than 30 times as heavy, and while thin-film inorganic cells also have potential to be very light, this is where OPV is likely to have its greatest advantage. The result should be applications in the windows and facades of future “zero-carbon” buildings.

Not everybody agrees: analysts at Lux Research have said previously that a lack of progress in large-area production and module efficiency will see conventional PV push out the organic technology, allowing it into only niche applications by the end of this decade.

Heliatek’s latest progress may start to challenge that view, but perhaps the real test is whether the company can attract the level of financing that it needs to scale OPV technology to truly volume production. If it can achieve that in such an uncertain market, it could be well on the way to proving any doubters wrong.