Biophotonics in the spotlight at UK's Photonex 2011

Holographic surgery aids and multispectral assessment of a patient's emotional state were among the topics discussed in Coventry.

by Matthew Peach
Amid rapidly growing interest in biophotonics, XMark Media added a dedicated conference on the topic to this year’s Photonex event at the Ricoh Stadium in Coventry, UK. No fewer than 17 presentations examining the various roles of photonics in biomedical sensing, analytical techniques and wider healthcare applications featured in a program chaired by Duncan Graham from the University of Strathclyde, Glasgow. 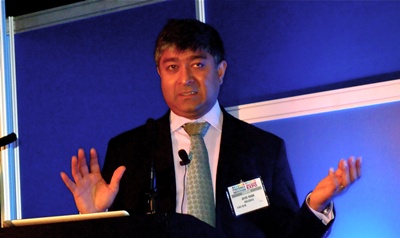 One striking presentation was made by Javid Khan, the founder of Holoxica - a start-up out of Edinburgh University working on 3D holograms and dynamic holographic displays. Holoxica’s digital holograms, measuring up to a square meter in size, are manufactured on a large laser printer with 1 mm red, green and blue square dots across the surface of the hologram. These are encoded at the nano-scale within a plastic substrate, the hologram only appearing when illuminated by a point source.

“Customers can have them in larger formats,” Khan told the conference. “But most of the designs that we make are about A4 or A3 size, up to the size of a poster. The pop-out distance in front of the hologram can be up to 100mm. These are real 3D objects that you can walk around and view from all sides. Holoxica has been involved with several projects for the medical industry recently.”

• A molecular design project with the University of Edinburgh, including the modeling of a nano-machine structure.
• Work with the University of Manchester on a 3D representation of a DNA structure generated from a Protein Database file, an established format for representing the bonds and atoms in complex structures.
• Collaboration with a start-up company in Manchester to create holograms of the biomarker Green Fluorescent Protein.
• Work with Plymouth Marine Laboratories, who are using Holoxica’s holograms to simulate the structure of milky white marine algae cells, for environmental research.

Whole-organ holography
In one of its most complex applications, the company’s technology has been used to create holograms of whole human organs. For example, a hologram of a human liver has been developed from patients’ ultrasound scans, to help locate cancers and other problems. These models enable a type of “virtual reality surgery” for surgeons to practice in virtual space before a patient undergoes a real procedure.

Khan told the conference, “In the next stage of this project, we aim to be able to highlight the cancerous area of an organ so that surgeons can have it front of them when they are operating on the patient - so they could visualize the procedure inside the patient.”

The National Museum of Scotland has also used Holoxica to create a 3D representation of an Egyptian mummy, based on images taken using a computed tomography (CT) scanner. Here, the idea is to display the inside of the mummy alongside the mummy itself in the museum, so that visitors can see in 3D view of the interior of a sarcophagus.

Besides the still holograms, Holoxica’s dynamic displays also enable short periods of animation. As a viewer moves past the holographic image, it changes and shows real-time movement – think Princess Leia being projected by the android R2D2 at the start of the movie “Star Wars”. On the Holoxica stand at Photonex, there was no Princess Leia, but a hologram of a man pouring a beer and then lifting it to drink as one moved around it. At the moment, the limitations of dynamic holographic animation are such that it can produce only up to nine encoded images, which equates to 3-4 seconds of animation.

Khan commented, “It’s clear from the way that this market is going that there is more and more demand for naturally viewable 3D images. People don’t like to wear 3D glasses and they don’t like the optical tricks that are inherent in current technologies - whether it’s lenticular technology (lenses) or the types of 3D glasses commonly used in 3D TV and cinema."

“There is a third dirty little secret of the imaging and related industries, which is that about one-third of the population are unable to see 3D images with glasses,” Khan added. “So there is a clear demand to go towards glasses-free 3D visualization.” 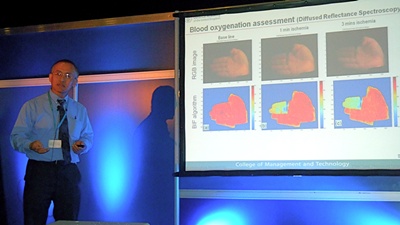 Swords into scalpels? Cranfield adapting defense for medicine
Peter Yuen from the Defence Academy of the UK at Cranfield University told the Photonex attendees that Cranfield’s traditional defense work is now being extended into biomedical applications. Yuen’s specialism is multi-spectral imaging (MSI); using multiple wavelengths to analyze and interpret changes in surface and sub-surface activity.

“In the future, when you go to see your doctor, they won’t be using a stethoscope - they will be able to tell you everything about your body and state of health by using remote sensing. They can tell your heartbeat – even your emotional state – by using imaging techniques. It may sound fanciful at the moment, but it’s feasible.”

“If you consider an ordinary [visible range] image of your hand, you cannot tell very much about it apart from the skin, because of the reflectance of visible light and also because of the way our eyes work. But by using a composite of the same image and multi-spectral imaging, then you can tune in to see whatever tissues you want to see. Depending on what you want to see, for example blood vessels, you can use particular wavelengths and change the wavelength to look a little bit deeper. That’s the benefit of multi-spectral imaging.”

Yuen illustrated the approach with a series of scans of the human hand in which blood flow had been restricted (causing “ischemia”) to two fingers using rubber bands.

Assessing emotional state
Yuen’s Cranfield team is even starting to use MSI to assess the emotional state of a person – for example by comparing images before and after hard exercise. Yuen commented that he had already collected some surprising results: “One might expect that after this test the whole of a person’s face would have a greater level of oxygenation – but actually that’s not the case. Some parts are becoming paler, cooler,” he said.

Here, MSI is revealing more than the conventional thermograms that can measure skin temperature under different conditions, but which do not reveal any variations of oxygenation across the human face. Although Yuen conceded that he could not explain why a “stressed” post-exercise face showed such variations, he was excited by the revelation and is still working on an explanation. He even invited the Photonex conference audience to offer their suggestions as to why the body would behave in this way.

“We are asking if it is possible to use MSI technology to assess the emotional state of the person,” he said. “Why there are these differences [in face oxygenation] I do not understand, but if you guys can tell me I would be very grateful! What we are trying to do here today is trying to highlight the assessment of human emotional or physical states using MSI.”