Ahead of Semicon West, industry group says it expects market recovery to continue – thanks in part to exploding demand for LEDs. 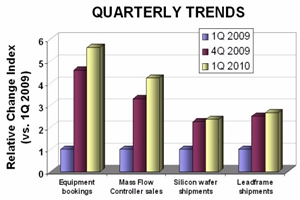 Equipment spending by semiconductor chip manufacturers, a key industrial market for vendors of both lithography and laser-based wafer processing systems, will reach $32 billion in 2010 – more than double the 2009 figure.

That’s according to the latest update from Daniel Tracy, a market analyst with the Semiconductor Equipment and Materials International (SEMI) organization.

Since the market low of Q1 2009, equipment bookings have increased more than five-fold, while equipment billings in just the first two quarters of 2010 have exceeded total spending recorded in the whole of 2009, reports Tracy.

The good news for suppliers of laser processing and other optical equipment used in semiconductor wafer and chip production is that the sharp upward trend looks sustainable:

“While economic conditions in some sectors of the global economy may be unsettled and obscuring the outlook for continued economic improvement, the semiconductor market has benefited so far from a robust demand for chips,” said Tracy.

“How economic market conditions will unfold in the second half of 2010 and into 2011 are unclear; however, the expectation is for the semiconductor market recovery to continue.”

Tracy will be releasing more data at SEMI’s annual Semicon West trade show, which takes place all this week at the Moscone Center in San Francisco, California.

LEDs powering fab growth
While all sectors of the semiconductor industry seem to have strong momentum, the fast-growing light-emitting diode (LED) market appears to be adding particular impetus to spending in 2010.

Tracy’s colleague within SEMI’s industry research and statistics department Clark Tseng says that overall semiconductor fab spending in 2010 will be up 117% from the figure in 2009.

But according to Tseng, the LED segment is far out-stripping even the rapid recovery of the silicon device market. He said:

“Driven mostly by the surge of LED-backlight demand for LCD panels and the huge potential market in general lighting, demand for LEDs is set to explode in the coming years.”

“In view of supply tightness and market potential, within the past year new facility and capacity addition plans have suddenly emerged all over the world.”

SEMI’s Opto/LED Fab Watch report, which tracks the number of operational fabs producing LEDs and other photonic chips around the world, shows that nine new LED fabs will come on line in 2010, bringing the total to 94. In 2011, the trend is expected to accelerate, with a further eleven fabs anticipated.

Although those increases may look relatively minor, the large scale of the fabrications facilities being built means that total LED fab capacity will grow 33% this year, and another 27% in 2011. By then, the worldwide capacity will stand at nearly 1.4 million wafers per month.

This rate of growth is sharply in excess of the wider silicon semiconductor industry, where despite the sharp increase in capital spending, capacity growth will remain in single-digit percentages for both 2010 and 2011.

The bulk of the LED production capacity is firmly entrenched in Asia, with Taiwan, China, Korea and Japan home to some 95 of the expected 105 operational fabs by 2011, and another three LED fabs in south-east Asia. Meanwhile the US will remain home to only three LED fabs for the duration of SEMI’s forecast, and the Europe/Middle East region will have just four in 2011 – one more than today.

LED capacity ramp
Capital spending in the LED sector will grow from $480 million in 2009 to $1.3 billion in 2010 and even higher in 2011, as manufacturers attempt to meet the demand for emitters used in large-size TV backlights.

Though this market only emerged around 12 months ago, such has been the response from consumers that manufacturers are struggling to keep up with demand and shortages of key materials have also been reported.

Concerns about the speed of the ramp-up in LED production and future oversupply do not worry Tseng at the moment, with the analyst stating: “Demand from general lighting seems to be progressing faster than previously expected.”

Echoing that sentiment is Barry Young, a displays industry analyst with IMS Research.

Young says that at well as the impact from the TV backlight sector, LEDs are in high demand for notebook PC backlights, where their market penetration is expected to rise from 46% in 2009 to a near-saturated 83% in 2010.

Between the final quarter of 2009 and the first quarter of this year alone, Young’s figures suggest that LED production increased 16% to 62.4 billion dies. Huge production increases at Taiwan’s HUGA Optoelectronics (31%) and Samsung’s LED-producing subsidiary (20%) can be largely attributed to the backlight phenomenon, while Epistar remained the largest producer overall.

Because of the shortages in the LED manufacturing chain, supply will only just be able to keep up with the increase in demand in 2010, says Young. As a result, the usual 10-20% annual decline in average selling prices (ASPs) of LEDs will not be seen this year. In fact, says Young, an increase in ASPs may even be seen for certain types of device.