Dismissed by its detractors as an old, expensive and complex technology, is concentrating photovoltaics (CPV) coming in from the cold? 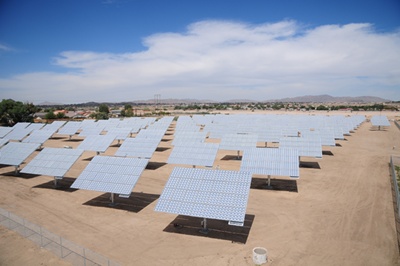 In the long run, producing electricity from solar power can only be a realistic option if it can match conventional energy prices. This challenge motivates hordes of researchers working in photovoltaics, and has driven the success of many companies, most notably the market leader in thin-film solar panels, First Solar.

But there is already an alternative. A decades-old, comparatively low-tech, low cost, photovoltaic approach that has literally come under the magnifying glass again in recent years. Literally, because that approach is known as concentrating photovoltaics, or CPV, where lenses or mirrors are used to concentrate the Sun's energy onto a photovoltaic cell.

The bulk of the cost of photovoltaics lies in the amount of semiconductor used, and the advantage of thin-film technology arises from cutting semiconductor usage to just one percent of traditional crystalline silicon photovoltaics. CPV systems go further, as far as 0.1 percent in some estimates.

If this provides one arm of CPV's pincer attack on costs, the other comes in its efficiency. High concentration photovoltaic (HCPV) firms use the world's most efficient cells, providing deployed plant efficiencies of 21-30 percent, compared with 15-20 percent efficiency achieved by standard PV systems employing crystalline silicon cells.

The result is that a CPV plant can generate more electricity per unit of panel area than other solar systems. “It uses less of everything,” commented Brian Robertson, chief executive officer of California system producer Amonix. “Less land, less materials.” Yet despite such advantages, barriers in both the nature of this technology, and the wider market, remain to be overcome.

For example, using concentrating optics means that CPV systems must remain tightly focussed on the Sun, exploiting multi-axis tracking systems to follow it across the sky. Crucially, for these systems to function effectively, the skies must be clear. How likely this is in a given location can be assessed by using a measure of the Sun's energy falling on the Earth known as direct normal irradiation (DNI). 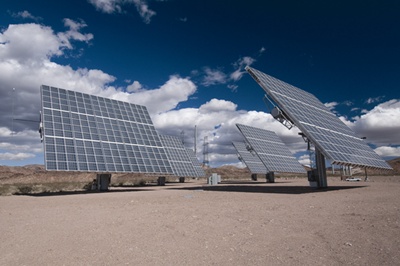 Nancy Hartsoch, vice-president of marketing and sales at Solfocus, Amonix's neighbor and rival, notes that CPV should ideally be located in areas where the DNI is more than 2200 kWh/m2year. While this restricts the locations where the technology can be deployed, she points out that it's not as much of a limitation as it may seem:

“If you get above [2200] you're typically getting to some pretty warm temperatures, and when you do that the other technologies don't perform well,” Hartsoch said. “It's in those markets that you see a forecast 74 percent compounded annual growth rate over the next three years, over twice that of the overall market. Very importantly, today this is an under-served part of the market.”

Value for money?
When actually building plants, however, price tags are clearly very important. To compare technologies, one measure that developers use is the installation cost per watt capacity of the facility to be built. Thin-film and silicon PV manufacturers are leading the solar industry in manufacturing momentum, and CPV companies have a lot of catching up to do. Yet while some CPV suppliers are still delivering systems at prices 50-100% higher than silicon flat plate equivalents, others are now competitive with their more established rivals.

In these cases, CPV system vendors may well be discounting heavily to gain market share. But even so, companies like Amonix are investing heavily in order to secure future economies of scale. “We're the recipients of two Department of Energy manufacturing investment tax credits, and that's to add eight additional thirty megawatt lines,” Robertson said. “Our Las Vegas facility will come online this year, so we expect to exit 2010 with a run rate of around 100 MW annual capacity and get that up to 240 MW by the end of 2011.”

The other key measure of cost in the energy industry is the levelized cost of energy (LCOE), which is a way to calculate the average cost of each unit of energy generated over the lifetime of a system. Performance is a key influence on this cost, and can be considered broadly in the number of MWhrs of electricity produced by a megawatt-rated system.

This calculation incorporates a key figure in solar power generation known as the performance ratio, which in turn represents the output of a system after losses arising from system components such as electronics are taken into account. For example, if the losses within a system are 10 percent, the performance ratio is 1-(10/100), or 0.9.

At a DNI of 2500, typical HCPV tracking system outputs currently range from 2200 kWh/kW to 2705 kWh/kW, corresponding to performance ratios of between 0.75 and 0.92. By contrast, a static thin-film module might expect to produce 1950 kWh/kW, and an average static crystalline silicon flat plate module would generate around 1800 kWh/kW.

One additional factor that weighs heavily on costs is the expense of financing and establishing a plant. This can add in range of 6-15 percent to the installation cost per watt, while interest rates are perhaps even more important for LCOE. And here lies perhaps CPV's biggest challenge: financiers see CPV plants as high-risk because the technology has a limited track record, making credit prohibitively expensive.

“Like any new technology, a major challenge that CPV has faced is project financing,” Hartsoch admits. She feels that because Solfocus now has three years of test data, and has deployed a number of systems, it is beginning to overcome this obstacle. “In the past six months much progress has been made,” she says “Combined with accelerated life testing, critical certifications, and analyses by due-diligence firms and developers, the challenge has been addressed and now projects are being financed.”

Robertson, meanwhile, believes that if financing can be gained on the same level as other technologies, the CPV advantage is already clear. “If you compare apples to apples, if you use the same model through three or four technologies, say a CPV system versus a Sunpower system versus a First Solar fixed-tilt, we think we have a 10-30 percent LCOE advantage in areas of high DNI.”

“Cost advantages exist today, and will become even more compelling as the technology moves forward,” Hartsoch agreed. “CPV is on a steep trajectory both in terms of efficiency improvements and manufacturing cost reductions,” she said. “Perhaps it's not quite 'the sky’s the limit', but the future does look bright now that CPV has reached commercialization.”

Andy Extance is a freelance science writer and market analyst, and co-author of “The Concentrated Photovoltaics Industry Report 2010”, available now from CPV Today.